We saw Cars 3 on Father’s Day.

(**warning** Hints of plot spoilers) Now, this isn’t a movie review post and I’m not going to get into the details outside this recommendation: For those who are skeptical because they didn’t much care for #2, give this one a shot. It takes us back to the original magic. The heart, the passion and the roots laid down in the first movie have all come to flower in this gorgeous story. It had me tearing up through a great deal of it and it was absolutely worth seeing.

That’s all I’m going to say about it becuase today, I want to share something even more beautiful than the story itself.

My daughter, for the first time in her almost five years of being alive, connected in a way I’d never seen her do with the Cars franchise. Before Cars 3, sure- she liked the movies, but she rarely asked to watch them and didn’t have much interest in playing with the toys. Occasionally, she’d steal the Sally, ‘Mater and Lightening from her brother’s toy boxes and have them go down her princess pony slide or drive around with her animals, but that was about it.

This time, before the movie was even over I could tell it was different. To test a theory, we went to Toys-R-Us after and I told them both they could have one toy under $20. She went through that entire store, through all the isles of her favorite, sparkly, pretty, pony, fairy, magic character friends and do you know what she picked? She put about 20 things into the cart and when it came time to make a final decision and put all but one back, guess which one she chose to keep? Out of everything that glittered, sang and literally “mewed” at her?

She picked a car. A plain looking, yellow car. No glitter, no sparkles, no magic… except for her story.

Her name is Cruz Ramirez and she is a hometown girl with a story not unlike many of ours – she had big dreams till too many people told her they would never come true, so she settled… Until she got a little push to believe in herself.

My daughter chose this car because (her words); “she’s a girl” she’s “as awesome as Lightening” and “she wins!”. With that, I realized something that I’d only ever believed in theory – Gender representation matters. It matters so much more than even I thought… until that day. I get it now, how important it really is, in a way I never did before. It’s weird, right? I mean, sure we know it matters, but how many times have we actually seen the moment of it making a difference in a young girl’s life that girls are represented in a positive, powerful way? Well, this was my moment.

This is a real-life moment, not a meme or a story from some hardcore, point to prove, left-wing journalist about female representation. This is me, I’m just a mom, pretty average, and we’re talking about my own daughter and how I saw with my own eyes just how valuable that representation can be.

Some people may say, “well – maybe she just likes it more becuase she’s older now and she gets it” and I’ve had someone respond to this situation with, “she’d probably have the same reaction if it were a boy car, it was a good movie!”.

When you ask her what her favorite part of that movie is, it directly correlates to the fact that Cruz is a girl car, doing things only boy cars have ever done before. The story is exciting and rich and fun, but once you realize what is going to happen, it goes from “just a cute, sweet movie” to a genuinely inspiring, girl-power story and I, for one, am certain my preschool daughter picked up on that. 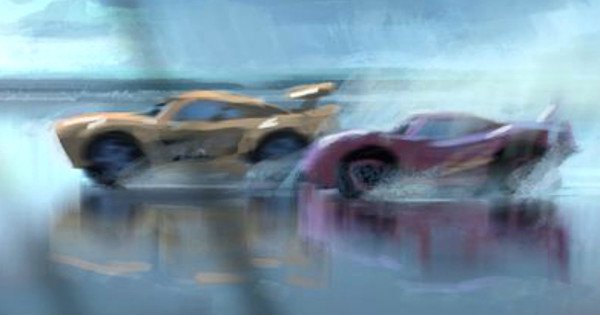 If a four year old child understands the value of girls winning at boy sports, why is it such a challenge for grown ups? I began to think about this in depth this week and I have some thoughts.

The sociopolitical air is ripe with opinions about gender equality, gender roles and how much of these standards we should be instilling in our children. The conversations can get vicious. The beliefs that “boys and girls should learn and play with things specific to their genders” and “boys and girls should be free to explore, learn and play with whatever they feel like” sit on opposing sides of a deep divide and without getting too far into the political debate, I want to simply present this anecdotal story as evidence that just maybe equal representation actually IS important.

Don’t we celebrate fathers when they “step up” and do the same work mothers do? Don’t we honor men when they clean the house? Don’t we praise young men and teen boys when they opt to take classes like sewing, poetry and art? Similarly, don’t we revere women who have done the work men do? Isn’t “Rosy the Riveter” one of thee most iconic and inspiring images of “girl power” in the modern, male-driven workforce, for both genders? Don’t we idolize characters like Lara Croft and Ripley and Sarah Connor because they are not “meek women” afraid to pick up a “man’s weapon” and fight?

Yes, we do. Because it’s wonderful when we see people -both men and women- unafraid to get the work done, to live their dreams, to champion forward in ways that inspire others to be awesome no matter what.

If a preschool child who has yet to understand the politics behind a concept like feminism can feel a new connection to a story she never cared about simply because of a difference in gender in a main character, can we still ignore the value of this movement to remind the world that women can do anything they want to do?

Whatever your answer is, it’s going to be based on your personal beliefs, core values and your experience. All I can say is, from now on, my answer is a resounding “no!” and with that “no”, comes a promise that I will not ignore that value again.