Skip to content
Lately, I have had to do all I can to remember this statement and believe it enough to not completely lose my head: 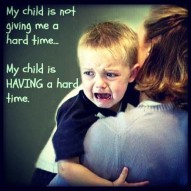