At long last, I found a show for my kids that I totally, completely, 100% adore and fully approve of and it’s totally for subculture parents, too!!

Crazy, right?!  It’s called “Niko and the Sword of Light”, so far only has a pilot episode out and can currently only be seen on Amazon Prime.

From the creative minds of Bobby Chiu, Kei Acedera, Jim Bryson and Adam Jeffcoat, all from Imaginisim Studios alongside their animation friends at Studio NX, this show packs an epic punch that will have you, AND your children, crawling back for more.

With the way I typically criticize television programming for young children, I don’t have to tell you I was skeptical, and what a big deal it is to say I was very happily surprised.

Here is the show’s description:

“Niko and the Sword of Light TV-G CC

(For children ages 6-11) – Ten-year-old Niko, the last of his kind in a strange world, embarks on an epic quest to bring light back to his land. Armed with his magic sword, Niko journeys to the Cursed Volcano, making new friends and powerful foes while uncovering secrets about his mysterious past. Based on the motion graphic comic by Imaginism Studios and Studio NX.”

I watched this show with my 4 year old son and 2 year old daughter.  I know that is far from the target age range this show is meant for, but they loved it.  When it was over, they both immediately asked to watch it again. I was happy to oblige!

Here are a few points I especially appreciated:

Genre/Style- Niko has awesome hair, clearly showing that someone can have a mohawk and STILL be a decent person.  Now, you may not think that’s such a big deal, but I believe it is.  In our culture, we strive to teach our children about equality and the value of a person no matter what they look like on the outside.  Unfortunately, those who choose a personal style that sits outside the “norm” are still harshly criticized by the same folks who would breach equality.  To me, this has always seemed like a giant double standard, so a true hero who has a “subculture” look about him, is welcome as a new dawn.  He lives in a post-apocalyptic world and his style and clothing exude that feeling. It is wonderful to see a children’s show with this style art and overall feeling.  It radiates with such rich detail and mature, comicbook-style, sweeping landscapes and villains, you can’t help but be taken by it.  One of the things I love the most, is this is showing our children something in this style universe, one we already love, something THEY get to love, too.  It absolutely brings together the best parts of our culture, bridges that gap between us and brings them into focus for subculture families.

Language- Niko speaks in complete sentences, appears to never use contractions or slang, utilizes proper grammar and has an EXCELLENT, mature vocabulary.  You can trust that if this show sticks around, I will absolutely be using it for spelling and vocabulary when we start school! 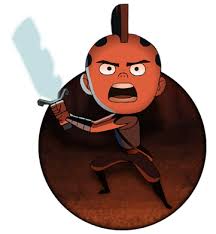 Noble Purpose- I love that Niko’s quest is truly a noble one.  IT’s not for glory or power, to be “the best” or even to “win” something.  His purpose is to rid the world he lives in of pain, darkness and sorrow.  What’s more, is his sword destroys the darkness, NOT the creatures and in fact, by defeating the monsters, it restores them.  It takes them back to their natural state; whatever animal it had been before it was overtaken with darkness. There are some great lessons in there!

Steampunk tortoise- excellent bonus.  That’s all there is to say. He’s just cool.

Positive choices and lessons- He makes great decisions and learns from rash or unwise choices. Those lessons are clearly identified and can be discussed with children after the episode.

Lack of gratuitous violence- I also noticed there is no punching, kicking, fighting, etc., only the use of his sword. This is wonderful to see, because it clearly shows that while he can take care of himself and protect himself and his friends, he is not violent and while there is fighting in the show, it doesn’t necessarily support violence nor does it inspire violence from the mocking bird children who watch him. His purpose is to save creatures from the darkness, not to harm anyone. I can totally dig that and I think most parents can, too.

Lack of Bad Attitude- While Niko is extremely confident and brave, he does not flaunt it and does not exhibit bad behaviors or attitudes that parents don’t want their children emulating. He speaks with kindness and confidence, but still appears humble and willing to learn. There is no nasty, whining attitude, talking back or name-calling. A true rare find in children’s programming these days, and welcome breath of fresh air!

Overall, I see Niko as a fantastic role model and I cannot wait to see what the creators decide to do next.

Oh, there is ONE, small piece of criticism I have; it’s about the creatures he saves from the darkness. I had hoped that freeing them of the “plague of darkness”, as Niko calls it, would change their hearts and make them kind. Explaining to my son what was going on, I told him Niko is not killing them or harming them, he is freeing them of the bad feelings that made them turn dark and mean and dangerous. So, when they again become small animals, we expected them to be nice and they weren’t, they were still mean… just small and “normal” animals again. It would be great if this could either be explained somehow or if maybe they could somehow regain their compassion and empathy when the darkness leave their hearts.

I also have a smallish warning for parents of very young children- the monsters are pretty monsterish.  To a child who scares easily, this may be a pretty spooky show.  Screen it first and be the judge.  Both of my toddlers loved it and no nightmares have resulted from seeing it.

With the many positive qualities of this show far outweighing the one, “kinda sorta” not so great thing that really isn’t all THAT bad… the beautiful, creative and stunning animation by artists with backgrounds ranging from Disney to Tim Burton and several things in between, this show is absolutely a winner in my book.

If you’ve got Amazon Prime, I highly recommend you check it out, but there are other ways to get it.  On their website, they are offering a digital comic, available at an app store near you.

Here is the show’s promotional trailer: