Okay, so little known fact- I have a guilty pleasure that not many people know about. I LOVE, LOVE, LOVE all things Royal Family related.

Those who know me, know I have somewhat of an obsession with the goings on in the UK, but not many knew that I cleared my schedule and spent literally the ENTIRE DAY & NIGHT watching the live coverage of William and Kate’s wedding. I mean, the TV stayed on the entire 24 hour period while they covered them getting ready, being seated, the ceremony, the public greeting, the after-coverage where they talked about how amazing it was, all of it. Granted, most of my interest is pretty selective and focused on the Island’s history from 0 to about 1914, but nonetheless, when things happen in the Empire, I tend to take notice. The heritage of the isle, the language, the theatre, the fashion and the beauty of England and it’s adjoining countries that make up the British Isles have always held a tremendous draw for me. Couple that with my ever-growing love of all things baby related and you’ve got a fantastic cocktail of goodness that I can’t wait to gobble up! So, it’s of course no surprise that I should need to post about the new prince!

The newest member of the royal family until yesterday known only as; His Highness of Cambridge, is now officially named George Alexander Louis. Born to Duke and Duchess of Cambridge; William and Kate. They announced his name the day after they returned home following his birth. 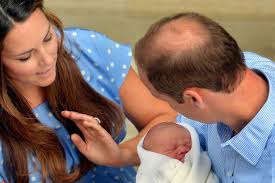 I had my vote on the couple either going VERY modern with something new like Blake, Brendan or Skyler… or the complete opposite and go for a deeply rooted, heritage-filled, family name like Richard or George, or Edward. Well, I was sort of right…? Baby George Alexander Louis has three incredibly important namesakes, fastening him to his rich history and family tree. Interestingly, NONE of the names chosen for the new prince have any ties to Kate’s family. So what’s up with the names they chose, then? If we are to look only at his name, not having any clue why they chose them, we see three visions of the British past; George, Alexander and Louis. What could we glean from the name of this young one? I thought taking a quick stroll down the family tree would be a fun adventure on a rainy afternoon.

If/when this young prince becomes king, he could be known as King George the VII, but there’s no guarantees of that, since a sovereign can choose which of his many names he wishes to go by once he is crowned. Case in point most recently- his father’s great-grandfather, Albert Frederick Arthur George, known as George the VI. George is William’s great-grandfather, Queen Elizabeth’s father. Reigning king of England from 1936 until 1952. It was during his reign that the boast ” The sun never sets on British soil” ceased to be true. During his time as king, George The Empire became instead, the Commonwealth of Nations and George was both the King of England and the Emperor of India for a short time. He had health problems and passed away when Elizabeth II was only 26. She was 27 years old when she took on the mantle of Ruler of the Commonwealth.

Previous Georges worth mentioning; Probably the most obvious is the one we in “the Colonies” refer to as Mad King George… the king who caused us to separate, the king we defeated in our American Revolution. A king who, the poor dear, wasn’t really that bad a guy, he was just… well, crazy. It wasn’t really his fault, he just had arsenic in his make-up and it eventually drove him mad. Okay, it was his fault, but if it hadn’t been for the fashion of the era, or if we’d had a better understanding of mental illness at the time, I would be willing to bet history would have been written very differently.

The name Alexander shows up many times in the family line, most recently in the form “Alexandra”, one of the two middle names of Elizabeth II, William’s grandmother and the current Queen of England. Her full name is Elizabeth Alexandra Mary Windsor. The addition of the name Alexandra was to honor Queen Alexandra of Denmark, King Edward the VII’s consort, who’s full name was Princess Alexandra Caroline Marie Charlotte Louise Julia… of Denmark. She had passed less than a year prior to Elizabeth’s birth. Why is she important? Well, she’s not incredibly so, unless you’re a lover of historical fashion. Well, that and she did give birth to the future king, George V; Elizabeth’s grandfather. The wife of King Edward married at age 18, Alexandra was also known as the Queen Mother once she gave birth to George and after her mother in law; Queen Victoria passed in 1901, she was known as Queen Empress Consort to the King. Eventually, she was given the title of Queen of England, but this seems to be a title that was given posthumously, not one she carried in life. Alexandra’s Edward was Queen Victoria’s son… and the namesake for the English fashion & style, “Edwardian”. Alexandra underwent a childhood operation, leaving a small scar on her neck. That scar was a source of embarrassment for her throughout her life and she worked hard to cover it through her fashion choices. Those choices, once she was queen became the choices of the Empire and eventually the world over. High-necked, tight collared bodices became all the rage. Her preference was either a very high and tight collar, or a lower, more open neck, but with a very large concealing choker as seen above. This fashion later became known as “Edwardian”, referencing the period of fashion she began as Edward’s queen.

Now for the “Louis” in the little prince’s name! Louis appears many times in the family’s history, however according to “Euronews.com”, the namesake belongs to the most recent Louis in the family; William’s Father’s great uncle; Louis Francis Albert Victor Nicholas Mountbatten, 1st Earl Mountbatten of Burma.

Apparently he was a beloved family relative, Prince Charles’ favorite confidant and mentor who is also honored as a fallen hero, assassinated by the IRA in the 70’s. Just to help understand how he fits directly in the family line, his grandmother was Princess Alice, one of Queen Victoria’s daughters. There were other Louis’ in the family tree, in fact- the very first King George bore the name George Louis in the 17th century.

SO anyway…. back to our new, beautiful little prince and his fabulous parents.
Kate was seen in a light blue dress as she left the hospital, very clearly and openly showing off her empty baby house. This excited mothers all across the world, as someone in the public eye was willing to show that YES, mamas still look pregnant after they have babies! They don’t all squeeze into corsets and hip-hugging belly bands to try and pretend their post-baby figure is exactly what it was pre-pregnancy. 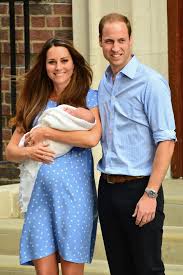 Kate also announced that she would be staying in her parent’s home postpartum while caring for her baby boy herself. This enlightened me in a royal standard that she has stepped away from with this decision; that of hiring a “Royal Nanny” otherwise called a “maternity nurse”, someone who cares for the baby and for the new mama in the home, 24/7 to make their lives easier. The maternity nurse makes up bottles, tidies up the nursery, does baby’s laundry, helps establish good sleep habits, educates the new mama in how to care, clean and nurse her baby and cares for the newborn while the mama is allowed to sleep through the night. With this break away of royal tradition, Kate has shown she is willing to step into the role of the modern mom; one who cares for her own child, rather than one who hires others to do it for her. Many women across the world are taking notice with this choice and speculating what it means or new national and international traditions being rooted into the fabric of our Western culture through her decisions.

Another question hot on the tongues of mothers everywhere- Will Kate nurse her baby? According to the Dailymail.co.uk, “about 5,700 fewer women started breastfeeding their babies in 2012-13 compared to the year before.” So, in a nation that shows extremely poor statistics for nursing mothers, many breastfeeding supporters are pleading with the new mother to use her position of fame and social power to take the role as crusader and openly, actively nurse the new prince for all to see. While no official statement has been issued by the new family, Kate recently purchased a nursing dress and according to the shopkeeper, she has ordered “a few nursing friendly” styles and stated directly that she will want more in similar style. This story was posted by E! Online early this morning, but seems to be the only tidbit of information to be found on the topic. An image of the dress she purchased is below:

Of course there were many companies who seemed to want to encourage the Duchess to go with bottle feeding, as their ads popped up all over the UK and the Internet as soon as the prince was born. Many depicting images of fancy bottles and formula being offered while congratulating the family on the birth of a new prince, the breast feeding activists the world over complained and protested the images, flooding them through social media with disdain. One company, Twinings Tea, offered a retraction of their original congratulatory ad, removing the image of a bottle with the new family instead. This was a small victory for breast feeding supporters. Check out the old and new ad below!

Alright, so I think I’ve covered everything I can for now… All that’s left is to stop for a moment and coo over this beautiful new baby boy!