Have you seen the memes that state things like “I got spanked as a child but I have a job and respect authority- if your parents spanked you, like this post” or other things like it?  I’ve had it up to my eyeballs with these types of statements which glorify countless generations of lazy parenting, equating corporal punishment with “America’s golden years”.  Somehow these ideas have made it back into the mainstream as “cool” or nostalgic and I’m not okay with that.

I admit, before I had children and even when I was pregnant, I was not against spanking as an option and often considered this is how I would handle severe issues or major safety situations when needed, for my child’s protection and security.

Now, I do not engage in the practice with either of my children and have grown to believe children should be protected from this position of authority who believes it is acceptable to physical injure someone smaller than themselves in order to make a point.

and I truly feel these memes perpetuating this violent propaganda that say if your parents didn’t beat you with wooden spoons, belts or flip-flops you are probably a bad person, a bad employee or in jail are not only grossly inaccurate, but mean spirited and generally coming from those who want to justify their “holier than thou” attitudes about how you should raise YOUR children.

These people are the ones that look down their noses at you in the grocery store when your child is learning boundaries or struggling with an autistic meltdown and think they understand you.  They glare at you from across the room and clearly think “oh what a horrible mother, allowing their terror of a child into this store!”  These are the same people who would so easily demand you simply “pop them a good one” and be on your way, “teach that child a lesson already, why don’t you- you horrible, lax parent! You’re going to raise a criminal!”  I always have to wonder about people like this and I assume they are in one of two simple categories;  They either have no children or they have adult children and they have forgotten what it was like to raise toddlers.

The last straw for me and what inspired me to write this was when this came across my feed a while back;

I have also seen one that says “unless you were parented like this, (showing a wooden spoon) you are probably getting one of these (showing a welfare check) or living here (showing a jail cell).  These memes and many, many more have been floating around Facebook in waves over the last few years.

Here’s another one that disgusts me; 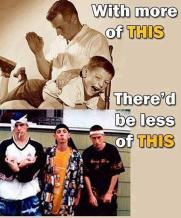 This is absolutely, without a doubt 100% wrong.  Ask almost anyone in prison if you need proof.  In one study I read, over 80% of inmates questioned stated they were spanked, beaten with belts, shoes, spoons and other devices regularly when they disobeyed their parents/caregivers and a large percentage of them them came from very strict homes. How many times have you heard gang members refer to their mamas as “the scariest people they know”??  For those of you who haven’t met many gang members, I can tell you from personal experience, every single one I have met (and I have met more than a few) have said that.

Did it stop them from braking the law? Nope.

Did it instill some sense of undeniable respect for authority? Nope.

Did it do anything but make them better lairs and better thieves? Nope.

I recently read a blog by a woman who worked in the juvenile correctional system and her article focused on corporal punishment at home and how NON-effective it really was at deterring all her kids in the home from breaking the law.  That says all I need to hear to know that spanking is not the answer and clearly isn’t a solid solution for behavior problems.

All of these memes glorify ignorant parenting and fear-based learning which actually works contrary to our natural learning cycles in the brain and can deter beneficial growth. So, when these types of memes start floating around the internet and I see all the comments encouraging the behavior as though it’s the coolest way to parent, it absolutely disgusts me.

There’s nothing “cool” about getting hit with wooden spoons.  There’s nothing “magically nostalgic” about sharing stories of our childhoods that were filled with fear for those who cared for us and it is absolutely NOT “parenting done right” to shame, hit or beat your child.

Personally, I didn’t have fear-based parenting in my life growing up and I think I grew up a pretty decent and productive person.  I had a sheriff for a father who taught me many things, first of which was never to use violence as means of getting my way.  I was taught this by my parent’s example in a loving home with clear boundaries.   Sure, I was spanked on occasion, but only on a RARE occasion and I never grew up feeling it was going to be the one and only reaction to my misbehavior as a child.  My parents sought other methods of teaching me a lesson and I believe those methods worked better than the spankings. When I got a spanking, I didn’t regret the action – I regretted the punishment.  Regretting a punishment does not teach a child an intrinsic motivation for doing good, just a regret in getting caught.

I am taking their lessons to heart and a step further by doing my best to employ the “gentle parenting” method of behavior modification that has a lot more to do with open communication, mutual respect and more listening than talking.  For young kids, it’s about redirection, lots of compassion and explaining the “why”.  For older children, it’s about helping them develop a deeper understanding of right and wrong behavior by evaluating cause and effect, consequences and choices.  It’s never a black and white; “because I said so and if you don’t, you’ll get hit” situation.  The parent actually has to work hard to be that living example rather than just smacking around their kid when they don’t do what they are told.  For some, this sounds like a whole lot of hippy talk, but I’d rather my child respect me because he understands the consequences and rewards of his actions rather than because he’s afraid of being hurt if he doesn’t do what I say.  I want to teach my child to hold an intrinsic value for doing the right thing- not an intrinsic need to save his bottom from turning red with pain.

At this point in our evolution as humans, we have learned that fear-based parenting creates more harm than good.  Numerous studies have been done to back up these theories, so, if you don’t believe me you can find them easily on the internet.  Corporal punishment teaches a child that being shamed and humiliated by your parents is acceptable.  We now know now that these feelings in children can create fundamental, psychological damage.  It alters their image of authority figures and can lead to all sorts of negative behaviors and perspectives.  We also understand now that if we as parents only use violent methods of parenting, our children will grow up to believe hitting people is okay.  Many of you may scoff at this, but here’s the reality… If you didn’t want them to learn to cuss, you don’t cuss at home.  Pretty simple, right?  If you don’t want them to think that porn is okay, you don’t watch it around them or talk about how much fun it is to watch.  See?  Easy.  So then, why would you think it’s okay to hit at home then get angry at your child for hitting little Johnny at school because he wasn’t doing what your child wanted?  Isn’t it an obvious connection?

Some would even argue; “well, spanking isn’t violence, it’s not ABUSE.”  Really?  Explain to me how hitting another person is not violent.  Because you love them?  Because it’s for their own good?  I’m pretty sure there are plenty of abusive men and women who used that excuse as they smacked around their spouses over the last several thousand years, too.  Does this ad from the 50’s make you uncomfortable?  If it were a parent with a child on his lap would you feel better?  Things to ponder… 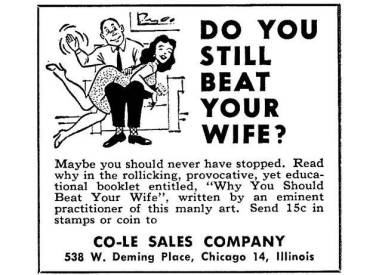 You know that look in your young child’s eyes after you spank them?  Its a split second of terror followed by complete shock once they see where the pain came from, followed by the realization of that pain and finally sadness.  The sadness isn’t because they got hurt or because they got punished for doing something wrong.  The sadness is that their parent, whom they trust beyond measure, just caused them pain and fear.  That look is their trust slipping away, one smack at a time.  Now, in older children, this is coupled with the sadness that they got in trouble. The sadness is laced with anger and fear of future pain.  This can lead to so many things we don’t want as parents; mistrust, lying, covering up bad behavior and a fear of discipline rather than a desire to understand correct behavior.  This is where the behavior of hiding things, lying and being secretive comes from.  It’s a fear of being caught.  A fear of getting in trouble and a fear of painful punishment- NOT guilt for doing something wrong.

For many of us, its not a question of spanking vs. not spanking, it’s a question of knowing what our options are and what our alternatives to the traditional methods are and whether or not those other methods work.  Are the gentle parenting folks just crazy hippies raising bad kids with no sense of personal accountability?  Are children really damaged by spanking?

These are all really important questions and I think it is important to remember that every family and every child is different and each of us are still learning as we go.  Even those like me who are willing to share information- we are still learning.  I am still growing as a parent and have many, many mountains to climb and many swamps to wade through.  I share these tidbits of information as they are what I have learned so far, but by no means am I the authority, truly- none of us are!  We all simply do our best with the information we are given at that time.  That being said, here is my first set of what I am sure will be many lists of options that I have learned so far.

Most importantly; be true to yourself as a parent.  If you have a partner, work together to create a plan of action beforehand.  Know how you are going to approach a situation before it happens, that way when it does happen, you are armed with the tools necessary to manage the situation as a family unit and not one person’s opinion against the others’.

Stay in control and remember your job is to teach your child to be an adult- not to just act like one.

So, is it cool to spank?  Are these memes showing us that it’s now acceptable?  No, I don’t think so- I think it’s telling our culture where we came from and clearly showing us where we shouldn’t go back to unless we want more of the same thing we have now.

….. because we’re all so happy with the way things are going in this country, right?  Think about that.